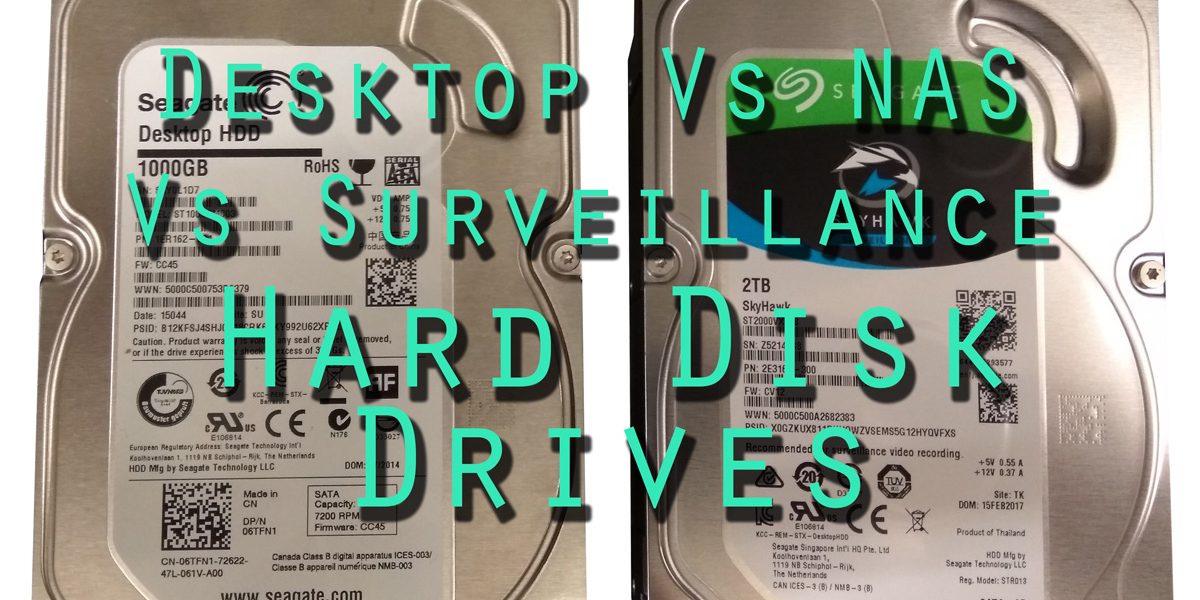 One of my clients I visited last week has a Surveillance system with 4 cameras recording to a digital video recorder. The unit would throw errors and perform very poorly when trying to play back video.

The system had been installed for around 3 years and had been throwing errors for the past few weeks.

It is typical for the installer to provide the hard drive when installing these systems. I had a look inside to find a desktop grade hard drive inside the unit. The picture in the title of this post shows the hard drive I pulled out and the one I replaced it with. The new unit is a Surveillance drive, both the same brand but both with different use cases.

There are generally 3 types of drives offered up by manufacturer depending on their use case:

All of the 3 above drives will have essentially the same hardware, but the difference is the firmware installed on the drive. This firmware changes the behavior of the drive. Telling it when to park the read write heads, how to organise the data stream, how to deal with read or write faults.

The Desktop drive is designed for general use applications in a system that is not on or being used 24/7. It is tuned for a mixture of data streaming and random data which helps load media and programs respectively.

A NAS (Network Attached Storage) drive is tuned for random data retrieval where many users are working on different files across the disk. It is designed to be powered up 24 hours a day.

A Surveillance drive is tuned for streaming data to and from the disk. It does not waste time checking for write errors as often as a standard disk and is designed for 24/7 operation.

The problem with the Surveillance system from last week was the desktop drive was failing due to constant operation over the last 3 years and the disk was checking for data integrity, slowing the system to a crawl.

Changing the disk over to a new Surveillance drive had the recorder working like new again. At the same time the storage was doubled and the recording profiles changed so now they can retain 4 months of recording at a time.

If you are interested in adding a Surveillance system to your premises, get in touch with UberNerd for a quote.